I am not a soccer mom. I thought I would be, but I'm not. Not yet, anyway. My first two kids have not been super excited about sports teams, so I try to encourage them in whatever it is they seem to enjoy learning to do. This spring, instead of heading out of town for sports tournaments, we went rock hunting! This kid loves to watch science-y shows, and recently had lots of questions about geodes and fossils. 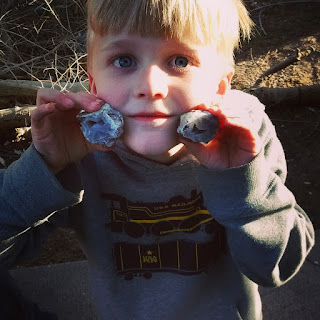 It just so happens that we live in Utah, which is a Geology hotspot if ever there was one. However, as every parent knows, kids lose interest in the obsession of the week pretty quickly. So, we tested the waters by buying a rock at our local Rock Shop, which we trusted would have a gap and crystals inside, because the guy said it would. We were only out $5 if he was wrong, or if the interest waned. As you can see, it was definitely a geode! My kid stayed excited by watching online videos of people digging and splitting geodes, so we took to the interwebs and planned an outing. 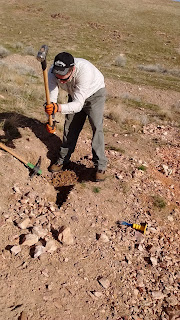 First, we borrowed a vehicle that had 4WD, in case it was necessary (thanks, Mom and Dad H!). Then we headed to the Utah Wonderstone quarry. There were so many eye-popping chunks of art just laying on the ground, but we brought out the "big guns" (sledge hammer) to try and get a bigger piece. 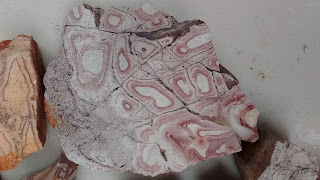 We brought enough hammers (and safety glasses, because we're nerds like that!) for the kids to break out pieces of their own, but there were seriously thousands of pieces just lying on the surface. I'm just in awe at how the sediments formed in every which way EXCEPT horizontal, how they normally do. 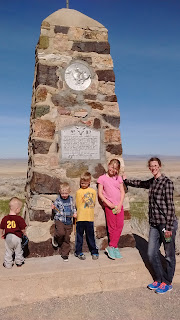 This is a marker along the trail of the Pony Express (and also the last bathroom stop for 25 miles there and 25 miles back!) at Simpson Springs. 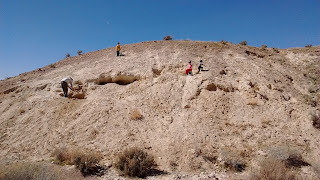 Then we drove just an hour or two to the Dugway Geode beds. We didn't find the exact mound where the geodes are right away, but when we saw the ground littered with shards of crystally goodness, we knew it was the right place. We weren't extremely sure which rocks were geodes and which weren't, but we knew if we busted it open the wrong way that it would shatter, and not be as nice to look at. So, we brought home a couple of buckets of rocks with unknown innards, and cut them on a tile saw after we got home. 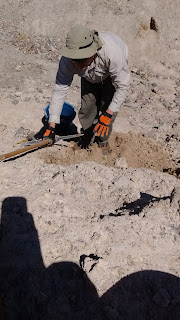 My husband worked his guts out in the hot sun, hoping to find something amazing. Being the middle of March, it was only in the upper 70's (Farenheit), I'm guessing. I am positive people who go there during the Summer months roast themselves. 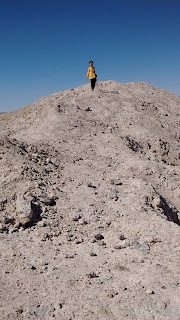 The picture doesn't show it, but this is the glittering trail of leftovers that other geode hunters left us. Kids love all shiny things (kind of like rodents do), so yes, we brought home some of the shards, too. 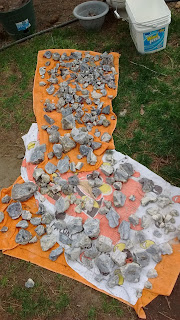 This is all the shards (upper orange towel) and mystery rock halves (printed towel and lower orange one after they were cut and washed. 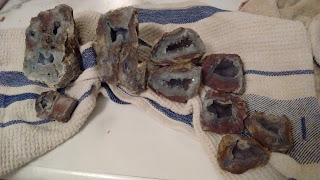 This is how many of the unknown rocks made geodes. My husband was pretty disappointed, but the trip itself was plenty rewarding, so he didn't stay down for long. 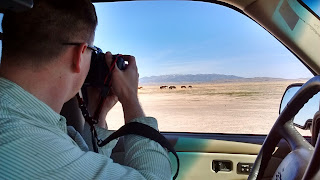 On the way to our next stop, we saw a band of wild horses! (Does 7 count as a band?) I like taking pictures of my husband taking pictures, because he's our photographer, and that's how we see him most often. But no, I don't have any pictures of the horses from his fancy camera, sorry. 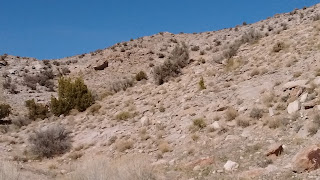 If you zoom in really closely, you can see two of my family members hiking waaaaaaaaaaaaaay over there. This is the place where we found nothing. Not one single thing. It's called Topaz Mountain. We looked on a map when we got back to internet-land again, and we were probably one canyon away from where we wanted to be, but the sun was setting, and we needed to drive over an hour to get to our hotel in Delta. We were hoping to find crystals or gems or fossils, but not so much. 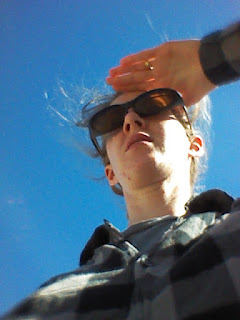 This is me looking waaaaaaaaaay over there. I accidentally took it when I thought the camera was pointing at a lizard on the ground, but I didn't hate it, so here it is. Yes, I'm also nerdy enough to wear the sunglasses-that-fit-over-my-regular-glasses. Desert hair, don't care! 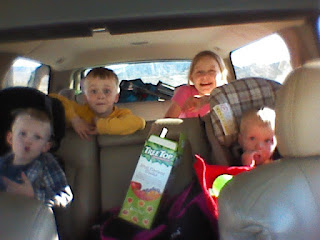 This is my crew, who behaved better than normal because Grandpa's car has a DVD player in it. 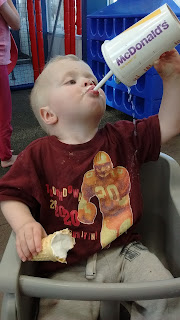 We stopped off for dinner before bedtime, and one of us missed our sippy cup badly. 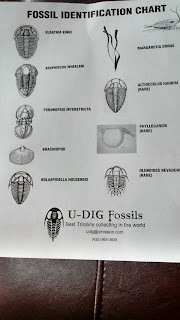 I just realized I didn't really get pictures of us splitting slate rocks to find trilobites (fossils). Oops. The thing is, we paid for two hours at that site, and we were pretty focused on gathering as much as we could. Listen, my husband and I are both quite "frugal." Not one-ply toilet paper cheap, but Use-it-up-wear-it-out, make-it-do-or-do-without cheap. It was kinda hard to pay kinda alot of money to dig in some rocks, but even WE thought it was so worth it in the end! I will be going to their website to leave an excellent review. After wandering around these other sites alone and unsure of how or where to find what we were after, it was such a relief to have extremely knowledgeable staff, and even a portable bathroom on the site! There was also a Chinese family there (who spoke English, as well), so my son got to use his skills from Dual Immersion Mandarin class to have a short conversation! (The mother was super impressed with his pronunciation, so high-five to the awesome teachers at our school!) But back to tri-lobe-ites! 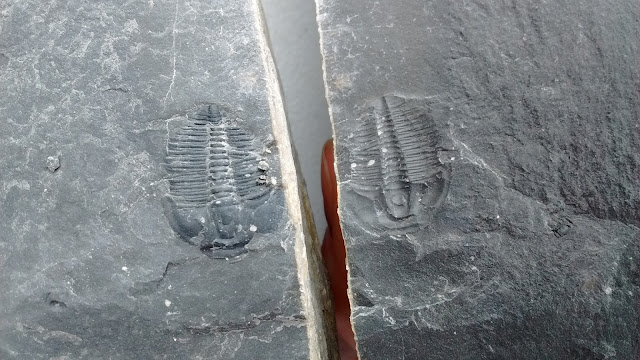 This is what we were after. Trilobites! These are from the pre-Cambrian period, so basically dating to the time of PANGEA! (Hi, that's kinda the name of this blog, I was excited.) So back when this part of the Earth's crust was under ocean, these little guys would swim around! This picture is one Trilobite (on the left), and his imprint (on the right). The imprints aren't really worth anything, but it's fun to have both sides, in my opinion. So, if you are super careful, you can work the trilobite out of the surrounding rock, and even see the fossilized underside. If that sounds a little improper, so sorry. 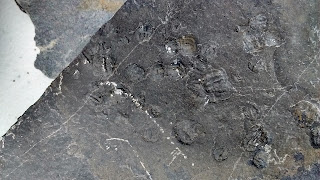 These are some of the non-trilobite fossils we found. They are so tiny! Less than a half inch end to end. See if you can identify them on the fossil chart I posted above. The operators of the site said we were there at the best possible time of year, because after the winter, the slate is much easier to crack apart. After it bakes in the sun for a few months, it's apparently much more difficult to get to the fossils. It was so easy and fun! We got to take home anything we found during the two hours we paid for. We don't plan on selling any of ours, but I suppose there's a market for them. 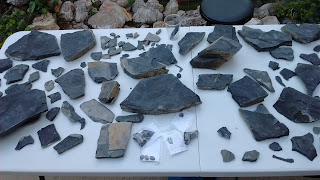 Here is our haul of fossils, waiting to be cleaned up, and maybe a few will get removed from the slate for display. 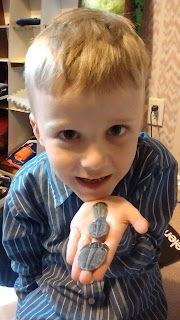 All this happened because this kid loves watching science shows.
(And doesn't play soccer.)
We are living the dream, I tell you what! Life is so good.